As promised, on Fridays I am going to provide you with insights into the way I work (or the things that slow me down and keep me from working.) I don’t know if it will be of any interest to anyone out there, and I certainly do not profess to be some literary genius or anything of the sort. But it might be helpful to someone (maybe even me) if I try and highlight some of my best practices. Please note, this is not a feature on how to write – for that I simply say, do what works for you. This is a feature on how I write.

I had brainstormed many different ways with which to kick this weekly article off, but I have decided it might be best to start at the beginning. (Note: Even just after typing that sentence, I realized that I was not actually starting at the beginning, and changed both the title and the topic of this article – that is just another part of how I work too!)

First, as I have said before, writers should write. I know that this can be a very hard thing to do at times, especially if you have a family, a job, a need to eat, a favorite TV show, or facebook. But if you are a writer, then what you do is writing, and you need to figure out how to make sure you do it regularly. I find that setting a schedule works well for me. I know that during the school year, while my kids are away, I write on X days between X times. And it doesn’t matter what else has to happen – during those times, I write.

Which brings me to point two – when you are writing, eliminate all distractions. Once you get your momentum going, you do not want to have to stop and find it again. I have a sign over my desk that say “Facebook is the writer’s ENEMY!” It was a bit of advice given to me by one of my personal literary heroes, Ari Berk, and it is the absolute truth. When I sit down to write, I turn off facebook. I also silence my phone, put the dogs out back, and I do not answer the door. (Only once has someone knocked while I was writing – they wanted to sell me cable TV. I figure if someone really important knocks, like the police, they will eventually bust down the door if they really need to speak to me.)

Finally, the whole point of this article, start at the beginning. Now, this might be the most controversial of my insights today, but I find that it does no good to start at the middle, or heavens forbid, the end of a story. I start at the beginning, and I let myself discover the twists, turns, and surprises that lurk in the shadows of my mind and let them slither their way out onto the page.

This is not to say that I don’t think about the middle, or the ending. In fact I often do know what I want to happen in those parts of the story, and usually a general arc the story will take. I may even think up a fabulous ending, or odd situation in the middle first, and then say to myself “Whoa! That’s cool. Now, how in the heck did it happen?” So I start by figuring out what happened first to get to that point. But I never write the scenes surrounding the odd situation first. At most I just jot it down as a word or two on the little pages of notes I keep littered around my desk. If it is really amazing, I might pin it to the wall (much to the dismay of my wife who recently repainted our studio.)

But really, I just start at the start, and write, write, write. I jot down occasional notes, but I let the story unfold as I write it. I certainly do not outline my stories first, nor do I stress over getting all the details right in my mind before I put them to the page. That would take all the fun out of the process. Then I would just be transcribing what has already been decided. I am not my imagination’s secretary! I let the actual act of writing lead to discoveries, and that shapes where the tale winds up.

At this stage, I do not dwell on spelling, or grammar, as those get fixed in editing. The first pass through I don’t even become a stickler for narrative logic. If I realize I have need to change something that happened earlier, because it does not make sense with what is happening now (and what is happening now is better), then I just jot down another note and keep going. Those inconsistencies can be fixed in the second draft. And I absolutely do not go back to the beginning and rewrite until I have reached the end. (Disclaimer: I may sometimes rewrite the last little bit of the day before, as I have come up with something slightly different to move it forward, but that to me is very different then going back to rewrite while I am still in the process of creation.) 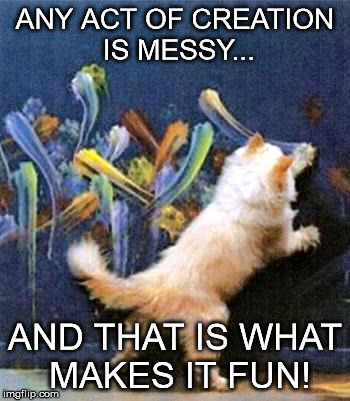 The point is, that if I spent my time trying to make sure that everything was perfect the first time though, then I would never finish writing. So that is how I do it. Plow through to the end, the go back and clean up the issues. It is important to me to see the story through from start to finish. Once it is written, then I worry about the hard part – making it readable. But the initial act of creation, that is messy; and in my estimation, it is supposed to be.

The Wÿrld Today with Gandersnitch the Goblin! A weekly-ish video podcast about all sorts of stuff.

If you like the stuff you read on this website, then you will love my published books! Available in paperback and ebook form at amazon.com.